Broad, flat, and just as suited to soaking up sunlight as shading whatever’s underneath, carports have emerged as popular platforms for solar arrays.

You might think of them as the logical evolution of ground-mount PV systems: taller, and dual purpose.

For members of the Fort Washington Golf and Country Club in Fresno, Calif., shaded parking is a welcome side-benefit of an ambitious new solar program. 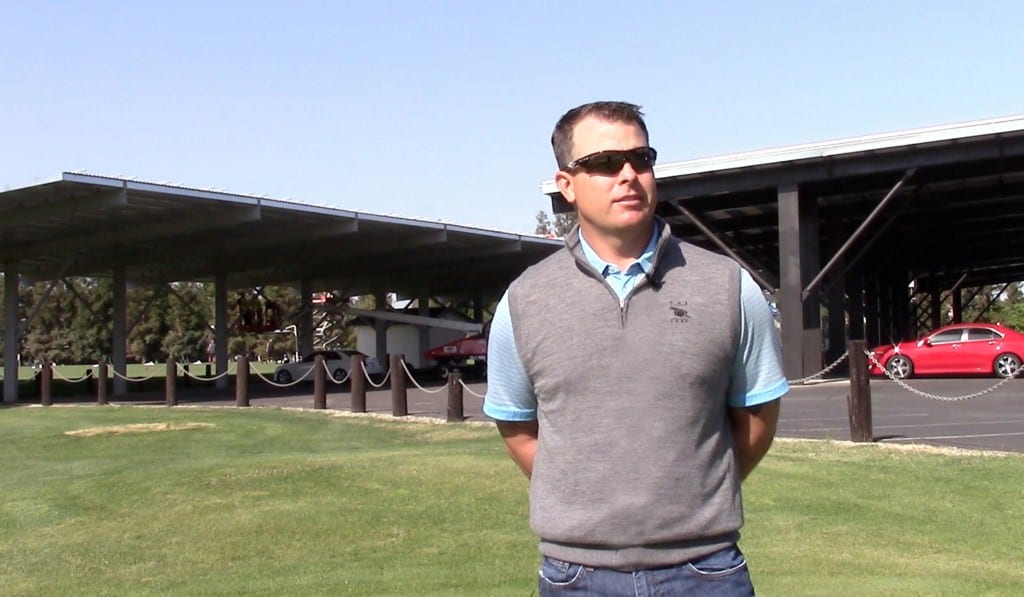 The club recently added six solar carports next to its driving range, the largest offering about 20,000 square feet of productive roof space.

Throw in an existing shed now covered with modules, and the new array totals 36,000 square feet –- about eight-tenths of an acre of glistening solar.

The 529kW system supports the power needs of the Fort Washington clubhouse and operations across the sprawling 18-hole layout.

“This is really forward thinking on the part of the club board,” said Dan Stockton, a retired college football coach and longtime Fort Washington member. “I hope some of the other area clubs will take a look at what we’ve done. It’s a good deal.”

The system was designed and installed by Solar Universe, the PV arm of longtime Fresno contractor Valley Unique Electrical. The company has offered electrical services and industrial-commercial construction management in the Central Valley, Bay Area, Nevada and Central Coast markets across four continuous generations dating back to 1924.

The elevated array preserves aesthetics on the picturesque course, an oasis of rolling fairways and swaying palms and eucalyptus trees in the burning San Joaquin Valley.

“The project itself is difficult, but we’re well versed in putting carports up with solar,” Selling said. “The measure of success for us is obviously leaving the end user with what we said we would provide them with, and as long as the energy bills come back annually based on our proposal, everything’s good.”

“We use APS religiously on all our commercial projects,” Paniagua said. “(The competing brand’s) trunk cable is very expensive, their splice kits get very expensive, and the one-to-one microinverter-to-module ratio drives costs up. Whereas with the YC1000 and its 1:4 ratio, that’s a real advantage.” 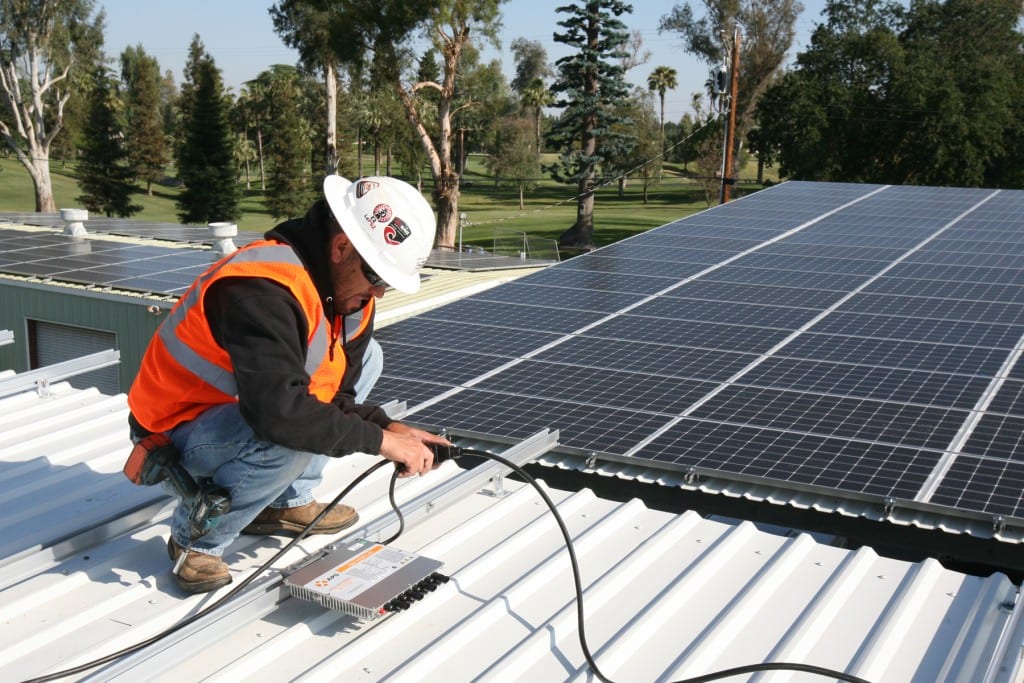 The Fort Washington project reflects a strong market for commercial and carport installations in the Fresno area.

Value Unique Electric/Solar Universe offers solar carports as an integrated package, and Paniagua has designed installations ranging in scale from 25kW to 2 megawatts.

“It’s easier to install on something designed for the extra weight and size of the PV system than to retrofit,” he said. “The designs vary based on the engineer and contractor erecting the structure. It’s a fairly simple process and one that works well for us.”

It’s all in the swing

Founded in 1923, Fort Washington Golf and Country Club is the oldest private course in the Fresno area.

Membership is currently topped out at the club capacity of 425, “with more people kicking to get in,” said Larry Wapner, club president and 30-year member.

The club has produced top-flight golfers familiar to any follower of the professional circuit. Fred Couples and Mark O’Meara both earned their tour cards on the course, renowned for its challenging hilly layout.

“You wouldn’t think we’d have hills in Fresno, but there are a lot of hills back there,” said Bob Fries, a club member since 1969 who, at age 85, is still considered to have the best swing among a group of retired Fresno City College athletics coaches who frequent the course.

On a recent morning, unfazed by the clatter of carport construction over his shoulder, Fries launched one ball after another down the range, each shot straight and true.

“It doesn’t take muscle,” Fries said, smiling, as his buddies looked on with respect. “I haven’t got any muscle left.”

Adding solar to the popular course had been in discussion for about three years, Wapner said, before Valley Unique Electric/Solar Universe produced the winning design and bid.

The issue was decided by a vote of the club membership, who would have to assess themselves to cover the cost. Support was overwhelming. 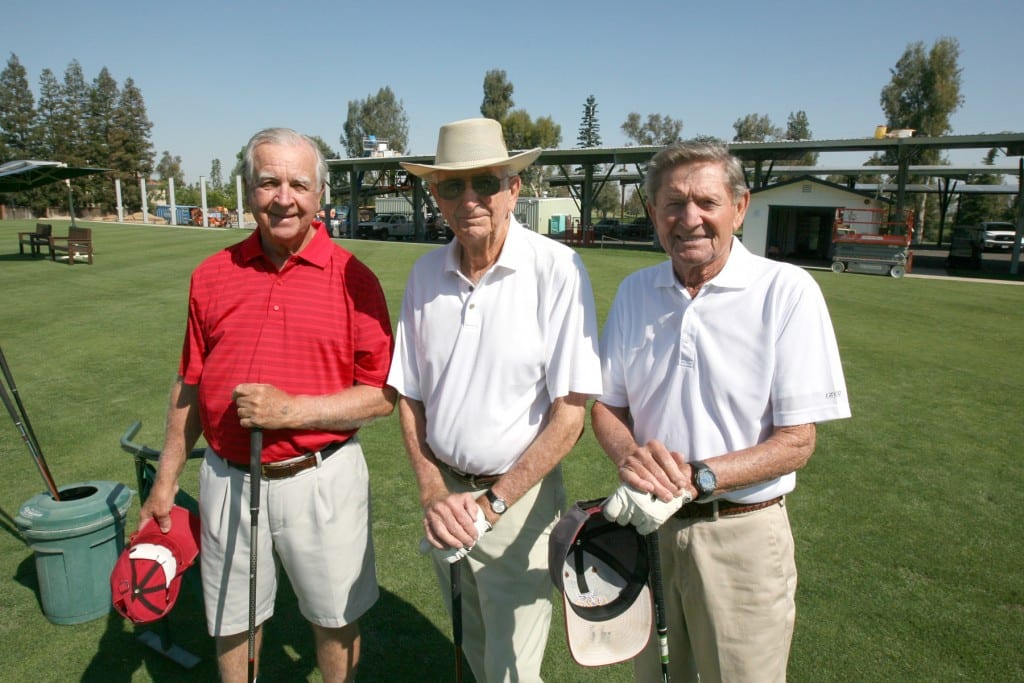 “It’s just a big plus,” Wapner said, looking ahead to the dramatic savings in energy costs projected by designer/installer Valley Unique Electric. “In six to 10 years, it’s going to put us in great financial shape, and that’s why we did it. It’s for the future.”

As a bonus, more than 80 parking spaces are now shaded from the punishing valley sun. Club members previously dueled over the handful of spaces shaded by trees, but then had to contend with pitch and debris on their vehicles.

Now they duel for the coveted carport spots.

“If you take a look at the parking we have today, the available spots are all in the sun,” Wapner said. “We expected that. The good thing is we were able to afford to build a (solar) structure that works as a carport. Now we’ve definitely got shade from the sun and exposure to weather.”

Enter to win an iPad at Intersolar, July 14-16 in SF
Scroll to top