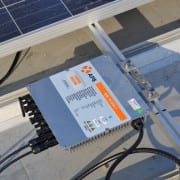 The groundbreaking YC1000 microinverter from APS will power a milestone true 3-phase installation going into service in China’s Zhejiang Province this week.

More than 1.4 MW of the total 8.13 MW project will be generated using APS microinverter technology – earning it distinction as the world’s largest true 3-phase microinverter installation.

The project at the Haining Hailide Jianshan factory began development four weeks ago, and is planned to join China’s national power grid on Dec. 30.

The installation includes 1,200 APS YC1000 microinverters. Now available in all APS markets worldwide, the YC1000 is the industry’s first true 3-phase microinverter and handles up to four modules per unit, simplifying PV system design and installation while significantly lowering balance of system costs.

Independent output and tracking optimizes the performance of each PV module while minimizing shading effects across the whole array.

Using the integrated APS Energy Communication Unit (ECU), Haining system managers will be able to track power output, voltage, current, temperature and other performance data of every module in the array.

The completed project will provide approximately 8.14 million kWh of energy per year, saving nearly 3,000 tons of coal while reducing CO2 admissions by more than 700 tons. Over the plant’s projected 25-year lifespan, the reduction in coal use and carbon and sulfur dioxide emissions will be multiplied many times over.

The year 2014 has marked the first widespread development of distributed PV power throughout China, an effort vigorously promoted by the Chinese government.

The electricity generated by the Haining system promises a strong economic return for investors, powering the factory even as it protects the local environment and promotes APS 3-phase microinverter technology in the robust China market and worldwide. 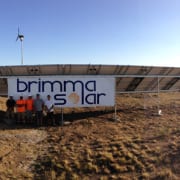 “It’s producing extremely well,” said John Francisco, chief of energy resources for Inland Power & Light, as he monitored the output of the new 30kW installation outside the utility’s office. “We were fortunate to finish construction and energize the array during the span of several cloudless days so we could get a good feel for the performance of the array.”

The ground-mount array sits in view of passing motorists on I-90, a prominent display of APS microinverter capability.

It’s the first significant venture into solar for Inland Power, a member-owned utility serving about 39,000 residential and commercial customers in 13 counties in eastern Washington and northern Idaho. Founded in 1937, it is the largest electric cooperative in Washington. 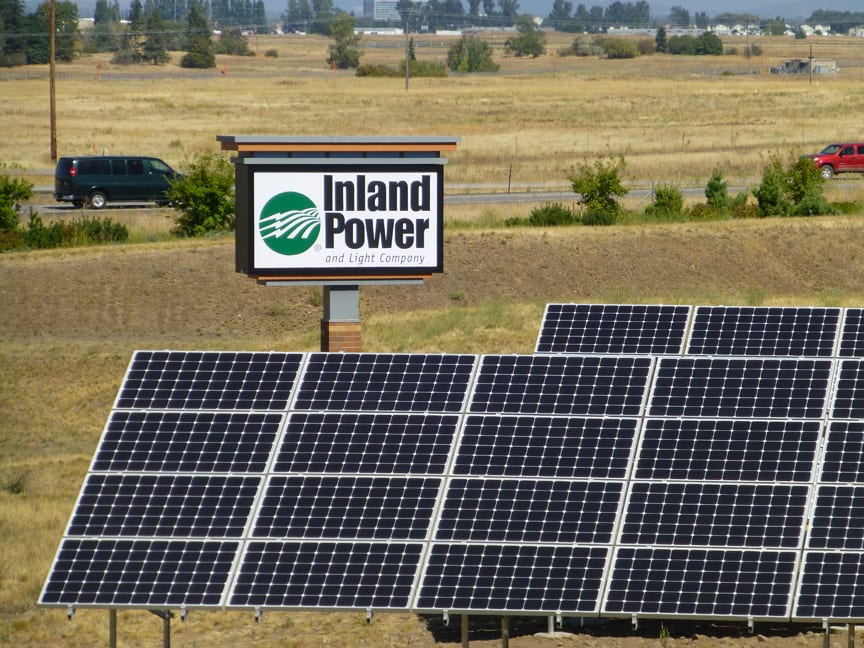 The full cost of the system was funded by participating utility members, who were given the chance to buy shares in the system and reap the financial benefits of solar investment.

The project is also a showcase for Washington’s thriving solar industry. The installation includes 56 APS YC500-MIW microinverters distributed by Blue Frog Solar of Poulsbo, 112 PV modules by Itek Energy of Bellingham, and racking by SunModo of Vancouver, Wash.

The installation was completed in late August by Brimma Solar of Vancouver, the winning bidder among three firms that vied for the project.

John Harley, Brimma Solar vice president, said the project’s impact extends far beyond the customers who will benefit from its power production.

“When a utility installs a system, it helps promote solar for their customers,” Harley said. “Customers with solar, or thinking about installing solar, feel comfort when they know their utility supports solar.”

For Washington solar manufacturers, the project is also chance to demonstrate the high quality of solar components being produced by local industry.

“We think this is exactly the sort of project our legislators hoped to encourage when they envisioned community solar,” said Tim Bailey, Blue Frog Solar co-founder and APS microinverter distributor. “To see locally made solar equipment in a showcase project like this is tremendous, and really shows solar’s success in Washington.”

Inland Power is the fourth Washington utility to develop an array under the community solar model, according to Phil Lou of the Washington State University Energy Program, which tracks the industry. About 30 community solar projects totaling 872 kW capacity have been developed statewide.

Those have supplemented residential and commercial solar installations in the growing industry. About 8 MW of solar capacity was installed across Washington in 2013, a 54 percent increase over the previous year.

In 2005, the Washington state Legislature enacted solar production incentives to promote the development of alternative energy sources including solar and wind.
Homeowners and businesses that install a solar system can earn a power rebate of 54 cents per kilowatt-hour of energy they put back into the grid – a “distributed generation” model – up to $5,000 per year.

The Legislature later extended the incentives to “community solar” projects, encouraging utilities and local governments to add clean energy arrays to their own production capacity. The sponsoring utility earns a state tax credit that is passed along to participating customers in the form of production incentives.

Inland Power already had about 80 customers with residential solar arrays. The utility also had a modest, 2.24 kW ground-mount array of its own that went up when it built a new office five years ago.

The opportunity to build a larger, community array on the same property made financial sense to the utility, and was met with strong support from members when it was proposed.

“We wanted to expand solar participation, and community solar was an excellent avenue due to the low entry cost to each participant and the very generous state incentive structure,” Francisco said.

With the array now up and running, members got the chance to buy in. Shares were made available to Inland Power members at $300 each, with a limit of 10 shares per member. A total of 526 shares were available.

The shares were priced high enough to keep the total number manageable by the utility, and low enough to allow participation even by customers of modest means, Francisco said.

Because of strong demand, Inland Power offered the shares to members through a lottery in October.

“We were way oversold, and the lottery was a fair approach to allocating the available shares,” Francisco said. Inland had approximately 1,300 members submit their names for the lottery, and 87 members were drawn.

Solar shareholders will receive the benefit of net metering, that is, the positive difference between their own power consumption and what their portion of the community solar system generates. They will also see a pro rata rebate from Inland Power per kilowatt hour of power produced.

“We are excited to help a broader section of our members enjoy the environmental benefits of solar power, contribute to our state economy by supporting in-state manufacturing and take advantage of the state-sponsored incentive program for community solar,” Francisco said.

Francisco said the project is already a success for Inland Power customers. If the utility is seen in the vanguard of community solar in Washington, that’s okay too.
“We’re doing this for the right reasons, but it’s nice to be recognized,” he said. “We believe in it, otherwise we wouldn’t do it.” 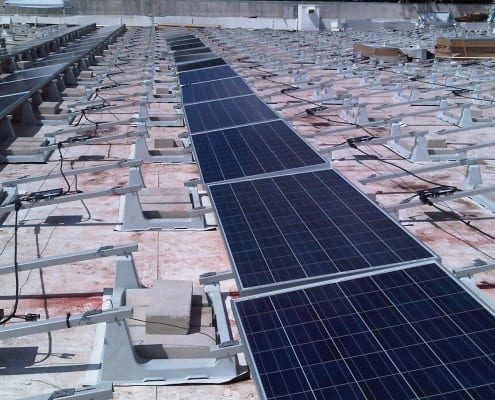 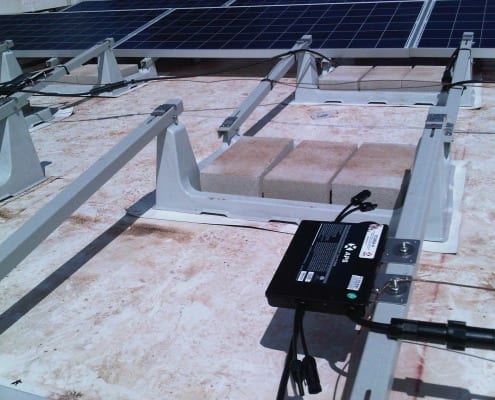 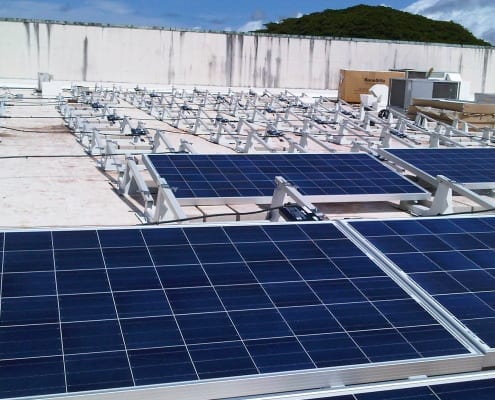 When owners decided to renovate a shopping center on the island of Oahu, Hawaii, their plans didn’t stop at the ceiling.

The expansive open rooftops at the multi-building complex offered perfect platforms for a new solar system to take advantage of the islands’ famous sunshine.

The 30-year-old shopping center on the Kamehameha Highway is an important commercial hub for the community, anchored by mainstays including Ross Dress For Less, 24-Hour Fitness and Foodland groceries. The center also offers an array of professional and financial services, popular retail outlets and eateries.

The project has become an ambitious proving ground for commercial solar power, and for APS microinverter technology – in terms of scale, and also because of Oahu’s nonstandard power grid voltages.

Three-quarters of the project operates at 277V AC, significantly higher than the 208V three-phase systems and 240V residential voltages standard in the continental US.

APS microinverters’ chip-based architecture allowed each unit to be specially programmed to easily accommodate the higher grid voltage – a flexibility built into each APS unit and unmatched by any other microinverter in the market.

“We’re the only microinverter that would work here,” said Tommy VanCleave, technical support manager for APS America. “We offered a technical solution that made this installation possible.”

In terms of scale, it is by far the largest domestic application of APS microinverter technology.

The system includes 3,046 PV panels by ReneSola, each offering up to 305W power output. The panel array is served by 1,523 APS YC500 dual-MPPT microinverters –- one for every two panels, representing significant cost savings and installation ease over other alternatives.

The proprietary APS microinverter design was also ideally matched to the large, 305-watt PV modules, and the greater AC output offered investors a significant ROI advantage over other inverters on the market.

Total system capacity is 929 kW, supporting the shopping center’s operations and putting power back into the local grid. Mall patrons are benefiting from Hawaii’s most abundant resource: the sun.

The project is now roughly 80 percent complete, with all 277V systems and one of two smaller 208V rooftop arrays now producing power.

The APS Energy Communication Unit software will provide real-time graphical monitoring of each rooftop system and individual PV modules within each array.

The early returns are strong — the system is actually outproducing the agreement between the shopping center and Pacific Power Renewables, putting more energy back into the system than originally envisioned.