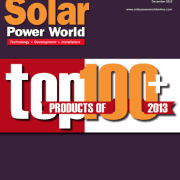 In advance of its Q1 2014 rollout, the groundbreaking APsystems YC1000-3 microinverter was recognized by Solar Power World among its Top 100 Solar Products of 2013 in the magazine’s year-end edition. The YC1000-3 is the world’s first 3-phase, 4-panel microinverter for large-scale commercial solar installations – advanced technology designed in the USA and available only from APsystems. 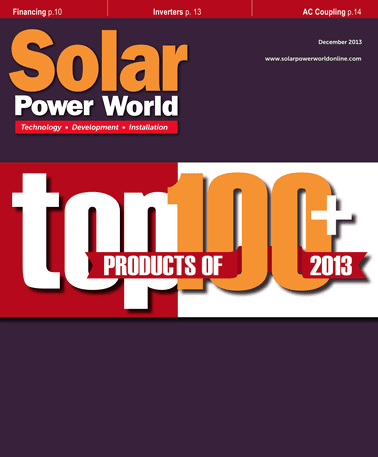 “We’re gratified to attract someone of Michael’s caliber,” said Kelly Samson, APS America CEO. “Michael knows the solar market, and he’s well known in the industry. He’ll be a dynamic presence as we establish new strategic partnerships for sales and growth.”
Ludgate comes to APS America with over six years in the solar industry, and will lead the company’s sales, business partnership and engagement strategy. Previously, Ludgate served as Senior Director of Sales and Marketing for Sharp’s Solar Energy Solutions Group and Kyocera Solar. As a member of the senior leadership team there, Ludgate successfully developed more than 45MW of commercial solar installations.

Before joining the solar market, he held senior management positions in the high technology sector (20+ years) including Intel Corporation (Managing Director for Storage and Industrial Automation); Hewlett-Packard (head of marketing for two startup initiatives); and Iomega Corporation (General Manager for the $1B Zip storage division).

Michael knows the solar market, and he’s well known in the industry. He’ll be a dynamic presence as we establish new strategic partnerships for sales and growth.” – Kelly Samson, APS America CEO

Ludgate earned a bachelor’s degree in mathematics from the University of Waterloo and an MBA from York University (with distinction). He is also the Judging Chair (AZ) for the Clean Tech Open in the Rocky Mountain District.

“We are hitting on all cylinders and our third- and fourth-generation products are well received,” Ludgate said of APS. “Aside from the incredible value proposition that we offer with the YC500 micro inverter, launching the industry’s first three-phase microinverter (YC1000) is an exciting milestone.”

Ludgate noted that APS ranked No. 2 in global market share among top microinverter suppliers by shipments in 2013 (Source: GTM Research).

APS microinverters convert the DC (direct) current generated by rooftop solar panels into the AC (alternating) current of home appliances and the surrounding power grid. Unlike conventional “string” inverters, which channel all the output from a solar array through a single unit, APS microinverters allow monitoring and management of individual panels in a solar array. APS’ proprietary, chip-based architecture ensures maximum system efficiency and power output in all conditions.

Based near Seattle, APS America supplies and services APS products in North America. APS was founded in Silicon Valley in 2009 and is now a global leader in the development, manufacturing and marketing of solar microinverters based on their own leading-edge technology.

Paul Barlock, APS America Senior VP, and Michael Ludgate, VP for Business Development, will present the APS product line to installers and distributors at the annual conference sponsored by the Colorado Solar Energy Industries Association. This year’s event is being held at the Omni Resort and Conference Center in Broomfield, CO.“We’re going to COSEIA in response to the customer requests coming in to APS,” Michael Ludgate says. “The word is getting out that APS is a microinverter innovator and in the top tier globally in microinverter units shipped.”

APS is on an aggressive growth curve in 2014, bringing our advanced microinverter technology to new markets across the US. Our flagship product is the YC500A, a two-panel, dual-MPPT microinverter with 500W maximum output. APS is poised to release the groundbreaking YC1000-3 microinverter, a 3-phase, 4-panel unit for large-scale commercial applications – breakthrough technology available only from APS.

Installers and distributors can email the APS team directly at paul@apsamerica.com and michael@apsamerica.com to meet with them during Solar Power Colorado.  Find out more about the APS line of advanced microinverter products at www.usa.apsystems.com or email sales@apsamerica.com.

For information on the 2014 Solar Power Colorado event, see www.coseia.org.

February 13, 2014 @ 12:05amIn advance of the first-quarter 2014 rollout of a new solar energy microinverter by APS, the manufacturer’s YC1000-3 microinverter was recognized by Solar Power World magazine on its Top 100 Solar Products of 2013. The YC1000-3 is the world’s first three-phase, four-panel microinverter for large-scale commercial solar installations.

The new product is a single unit that connects four solar modules (up to 310W STC each) to provide from 208V to 480V three-phase grid voltage. It maximizes power generation for each module to boost efficiency by up to 20 percent. The performance of each module can be individually monitored from a home computer.Find out more about the YC1000-3 by contacting APS at sales@apsamerica.com, or download the product spec sheets on the company’s website. APS America also announced the promotion of Paul Barlock to Senior Vice President. He will manage the company’s sales team and development of strategic partnerships.Barlock has been a senior sales and marketing executive in a variety of power electronics firms, ranging from startups to large multinational corporations. His work experience has been in custom power supply design, UPS, telecom power, cable TV backup power, and most recently in renewable energy. Barlock, a Marine veteran, holds an undergraduate degree in physics from the University of Pittsburgh and an MBA from Boston College. 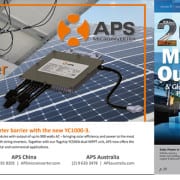 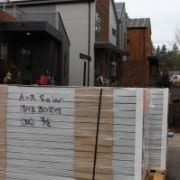 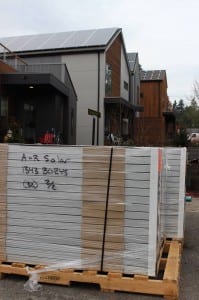 Grow Community on Bainbridge Island is the largest planned, solar-ready neighborhood in Washington state. With an array of APS Microinverters and Itek PV panels planned on over 50 neighborhood roofs, each producing up to 7,680 watts of power per residential system. The solar on each Grow Community home will save between 2.5 and 3 tons of coal per year. Here are some pictures from this weeks solar install by A&R Solar. 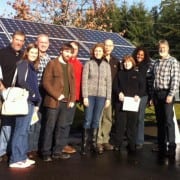 Thank you to Sen. Christine Rolfes and the office of Rep. Drew Hansen for their ongoing interest and support for a clean energy future! 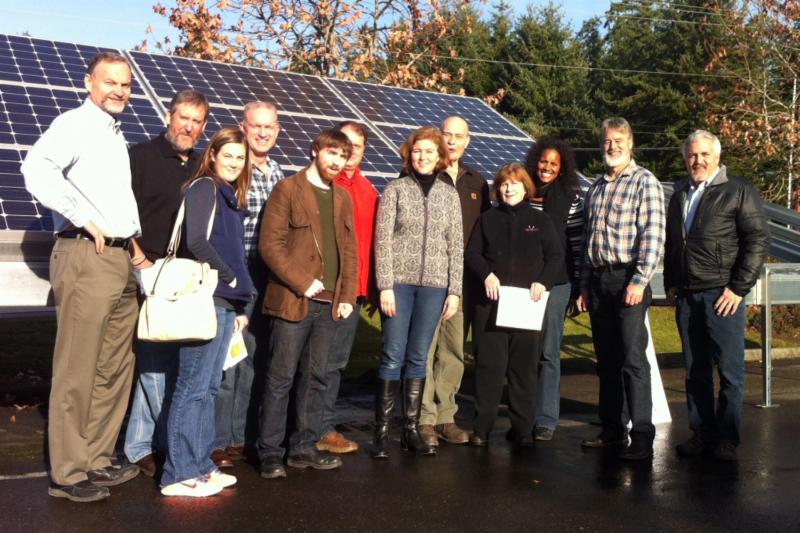 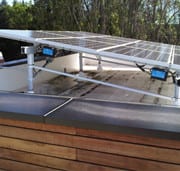 Season’s greetings and a year-end Thank You to our many solar partners for APS America’s outstanding success in 2013. Just a few of the year’s many highlights:

New APS microinverter installations were completed across the continental US and beyond. Topping the list were the ambitious Mililani Shopping Center project in Hawaii, Everett (WA) Community College, the Bainbridge Island Museum of Art, and six major commercial installations with the Tennessee Valley Authority. These high-profile community installations show the power of APS microinverter technology in action every day! 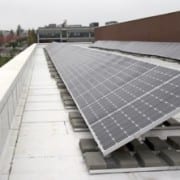 This installation stands out as the largest ever to receive Planet Power funding. It’s a 19.2 kilowatt, 80-panel array that will likely help the college’s new health sciences building earn gold certification under Leadership in Energy & Environmental Design (LEED) standards. 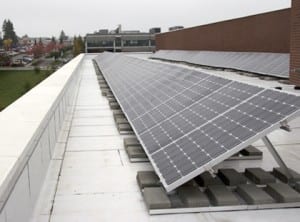 The three-story, 72,000-square-foot building is home to EvCC’s nursing, medical assisting and phlebotomy programs, as well as other health sciences training. It also houses an expanded Providence Everett Healthcare Clinic, featuring 20 exam rooms, and the college’s Criminal Justice program.The solar project is a locally-made enterprise: The solar modules were made by Itek Energy of Bellingham, and the inverters came from APS America in Poulsbo.A large monitor in the main-floor lobby of Liberty Hall will display real-time information about power generation from the array, demonstrating to visitors that solar energy is a viable resource right here in Snohomish County.
view article here
https://usa.apsystems.com/wp-content/uploads/2014/06/PP_EverettCC-300x222.jpg 222 300 APsystems Team https://usa.apsystems.com/wp-content/uploads/2018/05/apsystems-logo-300x92.jpg APsystems Team2013-12-09 05:47:512015-07-29 22:53:48Everett Community College – PUD, For Your Home 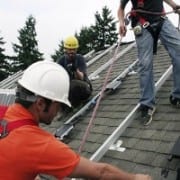 POULSBO — There are several incentives for Washingtonians to go solar.

Residential and commercial property owners with a “Made in Washington” solar array may be eligible for a check up to $5,000 per year for the power their panels put into the grid. At the same time, their power bill is reduced by the amount of power they produce. 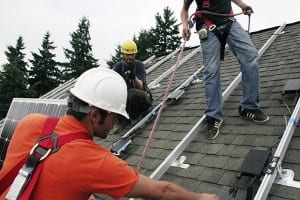 Put a solar array onto your home, and you may qualify for a credit of up to 30 percent of the cost from the federal government.

Installation of solar-energy systems in Washington is exempt from sales and use taxes.

With the incentives in place today, a new solar-energy system can pay for itself in five to seven years. After that, money from all the power you generate goes into your pocket. (And you can periodically watch your meter run backwards.)

“With some of the most progressive incentives in the nation, the return on investment for Washington residents today is real and substantial,” said Tim Bailey, co-founder of Blue Frog Solar. “Working together, our state has made solar a smart buy.”

Those incentives are driving consumer investment in solar-energy systems for homes and businesses in Washington state — and driving the success of a Poulsbo-based manufacturer and distributor of solar energy equipment.

Before we go on, here’s a simplified explanation of how a solar energy system works. An array of photovoltaic panels — on your roof or on groundlevel open space — captures energy from sunlight (even when it’s cloudy). Energy goes from the panels to a microinverter, which converts the energy into AC current. That energy supplements the electricity you use from Puget Sound Energy.

When you produce more electricity than you use, that electricity is made available for use elsewhere, and PSE buys it from you.