Condos, apartments, townhomes – three flavors of multifamily construction, each with its own challenges for reaping the power, and financial benefits, of solar investment.

Asani development company is tackling all three at once at Grow Community on Bainbridge Island, across Puget Sound from Seattle.

On buildings dubbed the Salal, the Juniper and the Elan, now complete in the project’s expansive second phase, solar arrays will benefit both homebuyers and renters alike.

One roof apiece, with many beneficiaries beneath.

“Our investors said, ‘let’s go for it,’” said Greg Lotakis, Asani president and Grow Community project manager. “Without their desire to be the largest solar community in Washington, and wanting to plant the solar flag in the ground, we wouldn’t be doing this. Without their support, it wouldn’t be possible.” 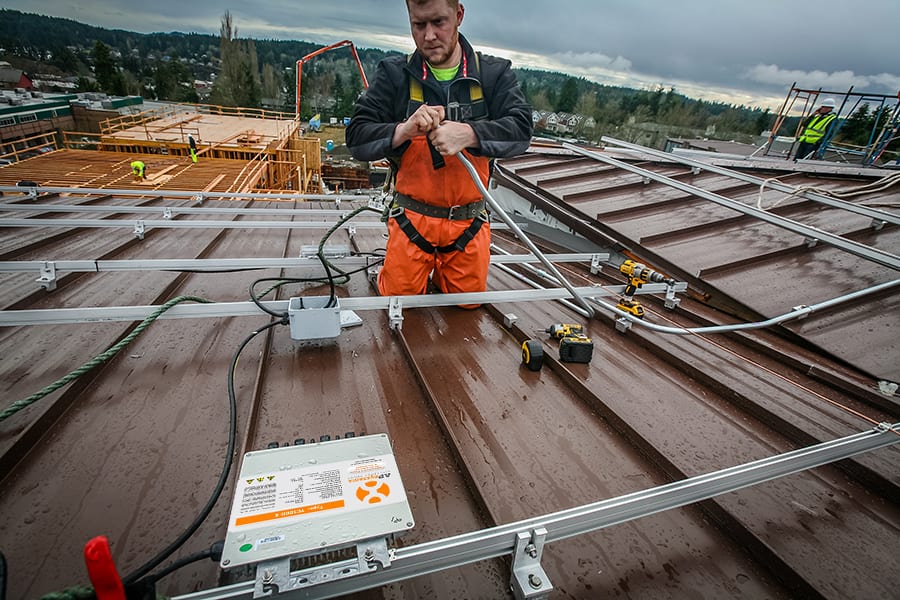 The Salal condominiums, with 12 units spread over three stories, is effectively a “community solar” project on a rooftop. Solar was included in the purchase price – no buyer option – and incentives from the State of Washington will be apportioned equally among condominium owners. Each will own a one-twelfth interest in the array.

Asani worked with state officials and the local utility provider to craft a program that satisfies the complicated provisions of Washington law.

The opening was a provision allowing common use of single roof for solar in multifamily buildings. Asani banked on prospective buyers seeing shared solar as a good investment as they bought their condo units, one that promised annual paybacks while lowering operational costs of their building through solar harvest.

Solar was designed into the Salal building. A single production meter monitors total system output, while 12 sub-meters track consumption in individual units for utility billing.
Buyers are rolling the cost of solar, about $15,000 per unit, into their mortgages to take advantage of low interest rates at the time of purchase.

“We wanted it very clean and divisible by all the owners,” Lotakis said. “I think it would be pretty difficult for six, 10, 12 people to come together and agree upon how the system would work after the fact. This gave us a chance to just deliver it.”

Lotakis expects the 44kW array to produce about $1,500 in incentives per unit annually – cumulatively much higher than the state’s $5,000 cap on incentives for a single-family residence.

Next door at the 12-unit Juniper apartment building, the 44kW rooftop array is similar but the equation is different. Renters will enjoy the benefits of solar production through net-metering, but not the annual state solar rebate. That will go to the building’s single owner, and will max out at the state’s $5,000 cap. The Juniper building array includes APsystems YC1000 true 3-phase microinverters.

The two-story Elan townhomes presented the most straightforward challenge. Individual 6-9kW solar packages are offered for each section of the common roof. No modules will cross the “virtual lot lines,” making each system self-contained within the owner’s patch of rooftop. Three systems have been installed so far, including APsystems YC500A microinverters.

GROWING NEIGHBORHOOD SOLAR
From project inception, Asani set out to build the most environmentally friendly development possible.
Relentless sourcing of renewable materials and low-impact fixtures, and close connection to the island’s town center, have positioned Grow Community in the marketplace for healthy lifestyle-conscious buyers.

The project’s first phase is noted for its shared pea-patch gardens and winding footpaths through close-set homes. The second and third phases are oriented around a woodland grove and open greenway. 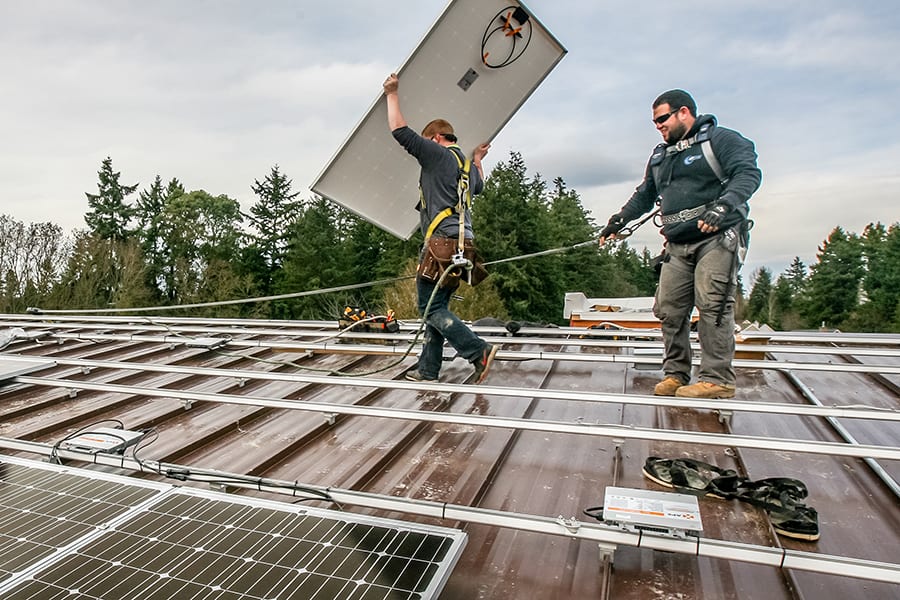 The project has earned recognition in national magazines and won awards from local and national homebuilder associations. It is only the second planned community in North America to be certified under the rigorous One Planet Living standards.

Grow’s first phase of 23 detached units sold out immediately, and every homeowner chose to add the solar package.

Asani has also showcased Made In Washington components to support the state’s solar industry.
Modules at the Salal are by Itek Energy of Bellingham, WA, while the Juniper and Elan arrays include APsystems microinverters manufactured and distributed by Blue Frog Solar of nearby Poulsbo.

Using a mix of in-state and out-of-state components allows Asani to achieve different price points for buyers while optimizing local incentives where possible.

Lotakis cautions that Grow Community’s multifamily solar program relies on particularities in Washington law. Multifamily programs elsewhere would face their own challenges, although he believes Grow offers a useful model for developers nationwide to consider.

With the Salal building only recently certified for occupancy, new residents have no comparative data on their energy savings. But the solar component was attractive, as it has been to buyers throughout the three-neighborhood, 142-home project due to be completed in late 2017.

“Solar was a factor,” one new resident said, “along with a development that encourages a sense of community.”

Between the federal tax credit and annual rebates from the state, Lotakis said, owners buying into the Salal condominiums could have their share of the common array paid off within five years.

“And because they’ve rolled the cost of solar into their mortgage, they don’t really see it,” he said. “Those production checks will be like a dividend.” 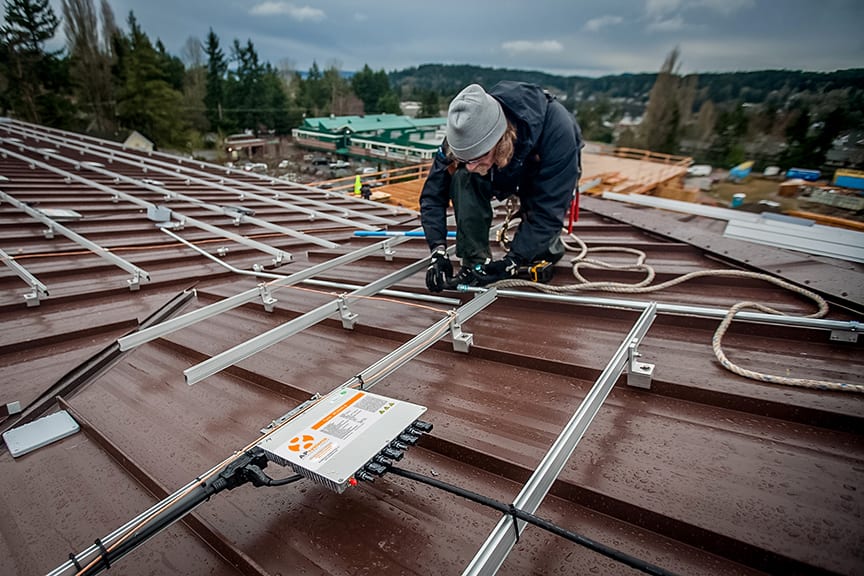 We invite you to attend the BayWa r.e. training an

APsystems has moved! The new location, at 8701 No

Don't miss one of our DS3 Installer Training Webin

2021 was a remarkable year. And while we may be fa

APsystems will be bringing its microinverters to R